Special characters of the Romanian language

Before talking about the special characters of the Romanian language (diacritics), I would like to briefly recall the meaning and origin of the word ‘character’ as it is understood in this context.

We must distinguish between inannzitutto glyph and grapheme. Glyph is derived from Greek and means “influence”. This brings us immediately to hieroglyphic signs (in greek means “sacred signs”) that indicate any message, engraved or painted, like those used by the Mayans and Egyptians. The grapheme is the smallest unit of a distinctive writing system, not further subdivided, which corresponds to a character of the alphabet. A grapheme is a unit of text as a glyph is a graphics unit.

a glyph is an abstract representation of a single grapheme, graphemes, or part of a grapheme. Most of the glyphs in typography are the equivalent of typefaces, which make up the series called “font”.

as well as in typography, the term “character“ refers to a grapheme, as we find in common writing systems. In particular, a computer font is an indexed collection of glyphs containing information on how to associate a particular code, display them in different sizes, and print them correctly.

A diacritic is an ancillary glyph added to a letter, or basic glyph. The term derives from Greek and means “distinguish”. Diacritic is both an adjective and a noun, whereas diacritical is only an adjective. Some diacritical marks, such as the acute (‘) and grave (`) are often called accents. Diacritics may appear above or below a letter, between two letters, or in some other position.

The alphabet of the Romanian language is made up of twenty-six letters of which eight are vowels and consonants. The remaining letters, however, contain some ‘special characters’. Five total, better defined as characters or diacritical marks that characterize the Romanian language and affect correct pronunciation, transcription, and especially meaning.

Here are some useful tips to display and print Romanian diacritical characters correctly. The purpose of these short tips is to help those who receive the file and are faced with text that contains strange symbols or appears to have numerous typos.

On keyboards used for the Windows operating system, the ‘special characters’ are typically placed on the right side of the keyboard.

The Italian keyboard follows the QWERTY standard defined by the sequence of 6 keys in the first row of letters.

The easiest way is to install multilingual support and the option for the Romanian language keyboard. With Windows Vista, the problem of the Romanian alphabet cartteri has finally been solved. Indeed, it is now possible to change the keyboard layout and configure it to use a language thanks to the wide range of different layouts installed with the Microsoft Windows operating system. It‘s advised is to configure the keyboard layout in Windows so that it matches the keyboard actually used. If you use a different layout, you should note that keyboard keys can display characters other than those shown on the screen. An example of the steps that are appropriate for versions of Windows XP, 7 and Vista can be found at the following link:

… you are definitely in the shelter of these problems, although not entirely. Unlike Microsoft, Apple has always focused on the aspect of the font for many years since the issue of diacritical marks, such as those in the Romanian language. Because of this, Mac users don‘t encounter many difficulties. Even the keyboard follows the standard QWERTY and features a Keyboard Viewer, a very useful tool in this context.

If you wish to learn more go to Unicode website.

Before you start to deal with character encodings, it’s important to clarify the concepts of repertoire, character codes, and coding. The terms are often confused, especially when it comes to the Internet.

The ISO 8859 family extends the repertoire of characters by introducing special characters depending on the language used. As mentioned earlier, this includes the ISO 8859-1 (ISO Latin 1) family, which contains the main characters of the western languages with Latin alphabets. It’s used by many applications on the Internet. For example, ISO 8859-2 (ISO Latin 2) contains the characters for Central and Eastern European languages (such as Hungarian, Czech, Polish, etc..).

The ISO 8859-15 is a revision of ISO 8859-1 which introduces the Euro symbol and other characters used in many languages.

ISO 8859-16 is used for the Albanian, Croatian, English, Finnish, French, German, Hungarian, Irish Gaelic, Italian, Latin, Polish, Romanian and Slovenian. In particular, it contains the letters “s” and “t” with a comma below to resolve problems with the Romanian language.

Read the entire article by Claudio Gennaro | ISTI-CNR (in Italian)

Use of diacritics in Romanian

Some personal sites on the internet tend to abandon the use of diacritical marks necessary for texts written in Romanian. In this way you can write a greater number of words in a short time. Another reason to avoid writing with diacritics is the incompatibility of different types of fonts, which transform these special letters into small squares and other punctuation marks.

Also assisted in the translation (or automatic) it is important to use letters with diacritics. Otherwise, the number of errors increases significantly.

In correspondence through e-mail, Facebook, Twitter, and other sites, a lack of diacritics is tolerated. But in published material, like newspapers and official documents, a lack of diacritics may cause confusion – sometimes funny, sometimes hilarious. Diacritical marks are required for the preparation of glossaries, dictionaries, textbooks, and other materials. Their inclusion helps avoid unncessary confusion, since their omission can hinder the correct reading of the proper names of people, places, countries and so on.

School of Journalism, Communication and Public Relations in Bucharest

To insert diacritics of the Romanian language, use the unicode commands found below: 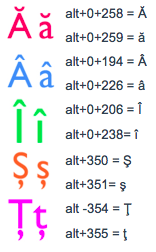 Unicode assigns a unique number to every character, regardless of platform, application, and language.

The best solution for the majority of the most operating systems (Windows, Mac, Linux), is the use of unicode commands.

This website uses cookies to improve your experience while you navigate through the website. Out of these, the cookies that are categorized as necessary are stored on your browser as they are essential for the working of basic functionalities of the website. We also use third-party cookies that help us analyze and understand how you use this website. These cookies will be stored in your browser only with your consent. You also have the option to opt-out of these cookies. But opting out of some of these cookies may affect your browsing experience.
Necessary Always Enabled
Necessary cookies are absolutely essential for the website to function properly. This category only includes cookies that ensures basic functionalities and security features of the website. These cookies do not store any personal information.
Non-necessary
Any cookies that may not be particularly necessary for the website to function and is used specifically to collect user personal data via analytics, ads, other embedded contents are termed as non-necessary cookies. It is mandatory to procure user consent prior to running these cookies on your website.
SAVE & ACCEPT